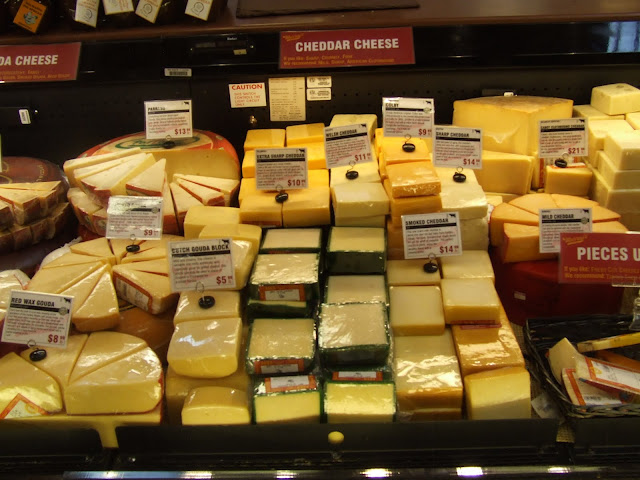 The cheese selection at Kroger just got better with a new New York City import.

To showcase its first Murray's in the area, Kroger hosted a blogger tasting at the Sawmill Road location this past Thursday. Disclosure: the wine and cheese in the tasting were provided free of charge. I was also given a bag with cheese and the Murray's Cheese Handbook. Like most cheese shops, Murray's will let you taste just about anything in the case.

The event was an introduction to Murray's, its history and its approach to cheese. While this is the first Murray's in central Ohio, others have recently opened near Cincinnati and Dayton.

Murray's organizes its cheeses by flavor (mild to sharp), and then by category (soft-ripened, blue, et al.). There are a ton of classic imports, as well as big-name American cheeses from all over. The Ohio cheese selection is currently limited, but Nathan Aldridge, the manager presenting the tasting, expressed an interest in carrying more as he becomes more familiar with Buckeye State producers.

Despite the local shortcoming, Murray's really does offer a great selection of cheese. Some of the stars of the tasting included the fresh Vermont Butter & Cheese Company's goat cheese, a crumbly, soft mild cheese with a light clean flavor. The fromager d'affinois is a soft-ripened goat cheese with the flavor of triple-cream cheese like St. Andre (it's actually a double-cream) and an unctuous texture that practically runs down your arm. The Pleasant Ridge raw cow's milk cheese had a funky herbal flavor that finished with bright citrus notes. The black label Cambozola is a blue cheese that's mild enough to win over those who hate blue cheese, and complex enough to make moldy cheese fans come back for more.

The staff is extremely knowledgeable about cheeses, as would be expected at an operation carrying Murray's name. They should be able to find a cheese for every palate. Like most cheese shops, Murray's will let you taste just about anything in the case. Vegetarians take note: Murray's lists the enzymes used in all of the cheeses, allowing vegetarians to avoid cheeses made with animal rennet.

It will be interesting to see how Murray's fits into the gourmet scene in central Ohio. While Murray's is a high-profile name in the industry, Whole Foods, The Hills Market, Katzinger's, the Giant Eagle Market District and Curds and Whey in the North Market have pretty formidable cheese selections, too. It will make great cheese more accessible to those who live near these Kroger locations, but will the Murray's name and approach be enough to draw people from outside the stores' vicinity who shop at these other area cheese providers? 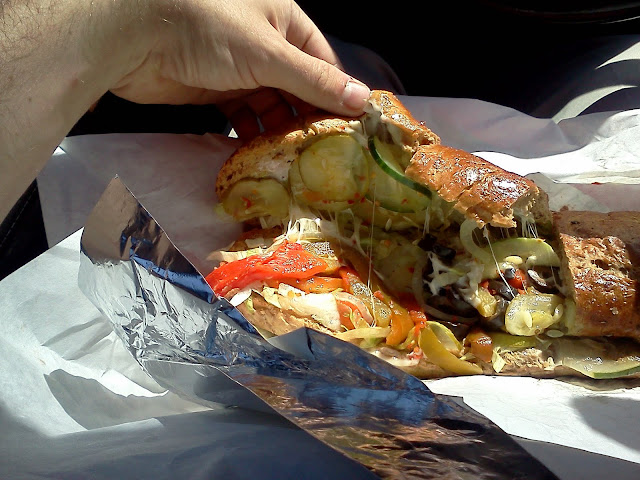 DiBella's Original Subs is a small regional sandwich chain that has recently opened two locations in central Ohio. The menu consists of fairly standard sub shop fare that is elevated by fresh baked bread and a nice variety of sandwich toppings.
Dibella's offers cheesesteaks, which takes me back to the first vegetarian sandwich I ever ate. A vegetarian co-worker of mine in the mid-1990s used to order the vegetarian sandwich from Steak Escape. In retrospect, I probably wouldn't find the Steak Escape sandwich quite as good as I did in high school. That notwithstanding, the addition of better bread and additional toppings at DiBella's adds another wrinkle to a type of sandwich I recall fondly.
There are three sizes of sandwich at DiBella's. The large is more than a foot long, served on multigrain, sesame, everything or plain white bread. Toppings like roasted red peppers add a nice punch to a sub. Subs can be ordered hot or cold.
The multigrain bread has a good flavor. I can't say no to veggies, so my sandwich had just about every veggie behind the counter.
Prices at DiBella's are reasonable. The veggie sandwich is about a dollar more than Subway's footlong Veggie Delight with superior ingredients on every level. It's definitely worth a try. 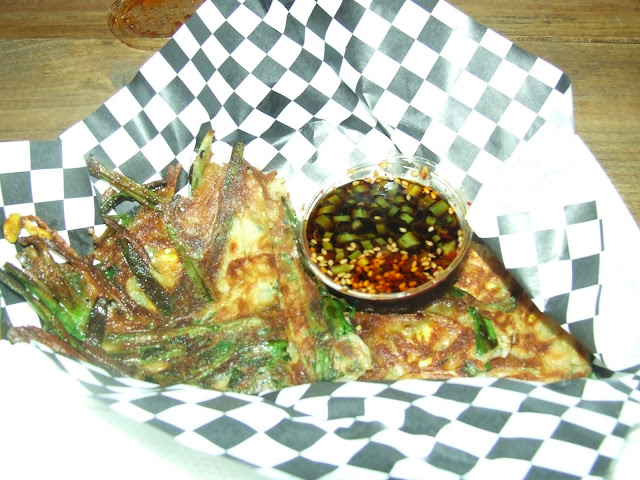 Ajumama is a Korean street food cart that specializes in items that are a little deeper on the menu than simple kimchi and bibimbop. Proprietor Laura Lee makes delicious food that possesses a heart full of Seoul (soul).
The signature menu item is a pajeon, a Korean pancake with green onions and a variety of different fillings. The pancakes are made with egg; there is no vegan option.

The Nelson is a pajeon made with mixed vegetables. The veggies were different on two different visits. Both times they were prepared with green onions. There was roasted corn in the pancake on a second visit. The soy vinegar sauce gives the pajeon a salty, savory explosion of flavor.
Sometimes, a vegan rice porridge is on the menu. I have not sampled it.
The hodduk is pretty much the best dessert that I had never heard of before trying it this summer, and I am not certain how I lived this long without one. It is a soft pocket stuffed with nuts and molten brown sugar. It's hard to eat just one.
Ajumama seems to be a fixture at Dinin' Hall in Franklinton on Wednesdays this month. It can be tracked down on other days on Facebook and Twitter. 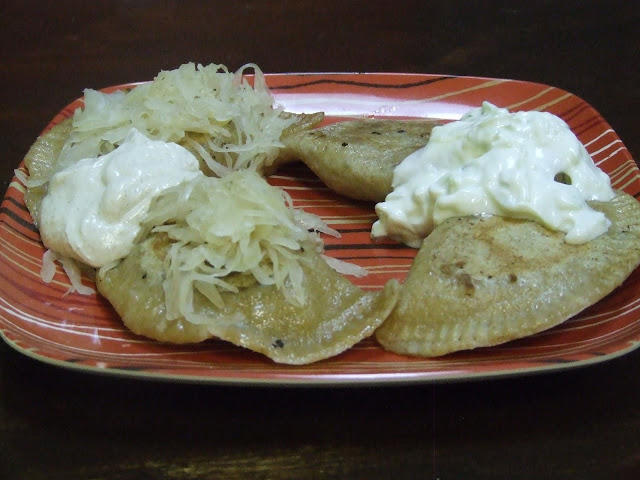 Yogi Perogi is a Grandview restaurant specializing in the famous Polish dumpling. The pierogi at Yogi Perogi are given an international spin by owner John Wagner. The space is small; though mostly designed for take-out, there is seating for about 12 inside.
Pierogi flavors include the classic potato and cheddar, mushroom and Swiss cheese, and spinach and feta cheese. They can be ordered individually or in frozen three-packs to make at home. The pierogi on the menu are vegetarian but not vegan. There is a vegan pierogi that can be requested that does not appear on the menu. There are also salads and sometimes vegetarian soup.
The pan fried pierogi pick up a perfect texture that is delicate while being both light and crisp. The potato and cheese filling has black pepper accents.
The spinach and feta cheese had a bright green color and a bright taste. It paired great with tzatziki sauce.
The mushroom and Swiss pierogi were earthy, and the kraut, common in Polish fare, gives the dish a more German character.
It might be worthwhile to bench the Mr. & Mrs. T's pierogi that have been festering in the back of your freezer and replace them with a pile of pierogi from Yogi Perogi. Between Hania's, Sophie's, Babushka's and Yogi, the area has been inundated with pierogi over the last few years, and these are good enough to stand out from the pack.