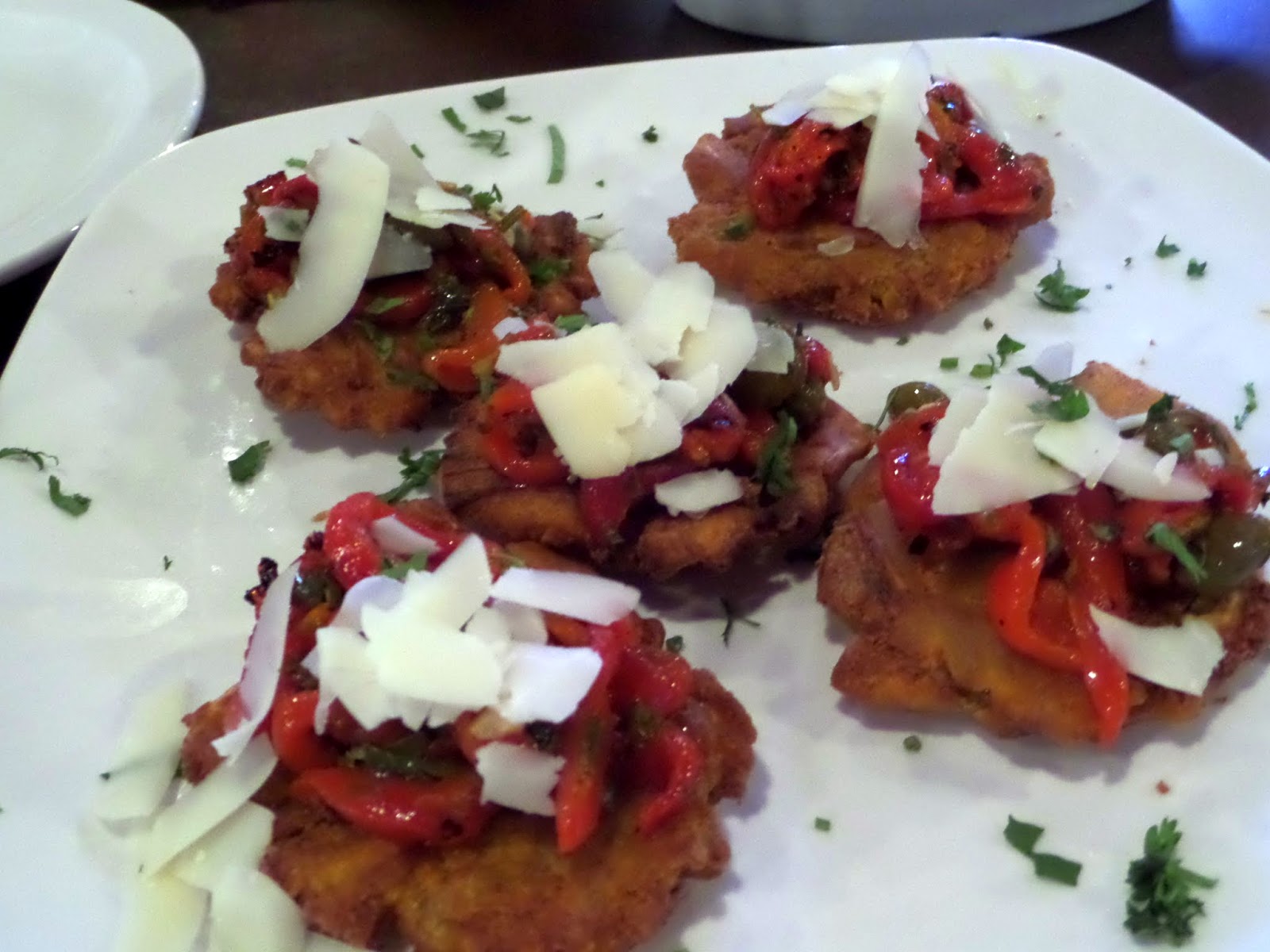 Arepazo Latin Grill brings all of the things you love about the Downtown location of Columbus' global Latin favorite, and then they add tapas and a full bar. Carlos Gutierrez brings the same formula working at his Gahanna operation.
The space is open and inviting. It is much larger than the Downtown restaurant. There are plenty of options for vegetarians.
Like the other two locations, every dish tastes delicious smothered in the famous cilantro sauce. Dishes originate in Latin American countries in North and South America.
Vegetarians can order meatless arepas, patacons (a stuffed fried plantain boat), burritos, tostadas and three tapas for lunch. Dinner has a wider selection of meatless tapas options.
The bean and cheese empanada might be the best way to spend $3.75 eating in Columbus. The fried corn pocket is crammed full of black beans and white cheese until it's about the size of a small Nerf football. The appetizer is almost a lunch portion by itself.
A few of the vegetarian tapas involve perfect tostones, or fried plantain chips. Arepazo's tostones have a crispy exterior, but are thick enough to also display some of the fruit's softer textures. They are great served with a garlic aioli, and even better topped with roasted red peppers, parsley and slivers of Manchego.
Servers were able to answer questions about vegetarian items on the menu, and served multiple meals quickly enough to keep lunch crowds moving. 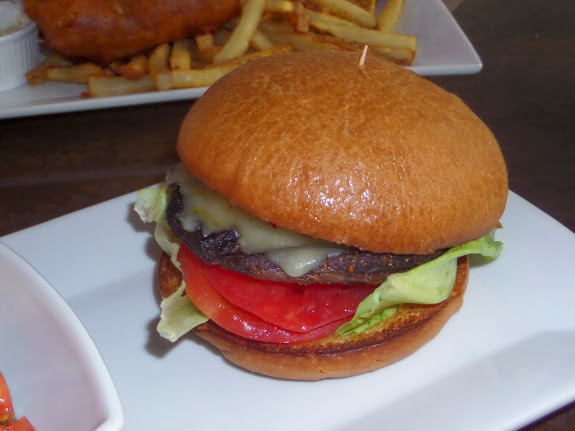 Westies Gastropub is a sleek spot on the south side of the Brewery District. It's a great place to catch a game with large high-def TVs lining the walls, and the kitchen turns out tasty comfort food classics that pair well with craft beer and cocktails.


Its location is a bit south of some people's normal Columbus travel radius. Hopefully they ignore the address, because plenty of great restaurants are found outside of the more high profile neighborhoods.


The restaurant focuses on local, organic ingredients. The bar has a great selection of local brews.


The menu has vegetarian starters, salads, sandwiches and pizzas. Some items, such as the potato and cheddar pierogi, can be prepared in a vegetarian manner by request.


The grilled portabella mushroom, served on a grilled brioche bun, is prepared like a veggie burger. It is topped with pepperjack cheese, lettuce, tomato and chipotle mayo. The smoke flavors were nice, though the texture was slightly gummy.


Other vegetarian entrees include the grilled cheese and tomato sandwich and the vegetarian delight, which is grilled tofu with carrots, edamame, onions, brussel sprouts, slaw and arugula with a quinoa side salad. 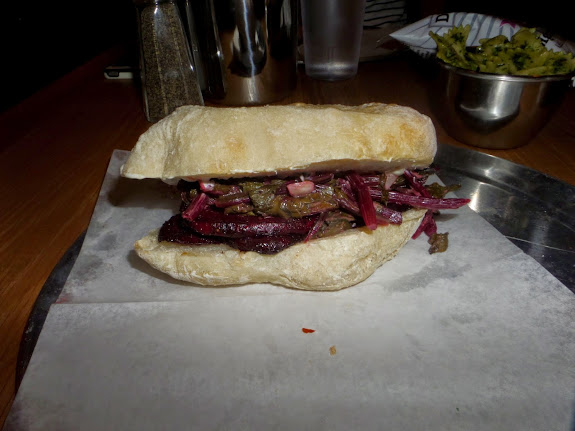 The Carvery is an Italian sandwich stop in Downtown Columbus that is a cut above the rest of the competition. A meal can be eaten quickly here, but the slow-food roots show in everything that comes out of the open kitchen.
There is one regular vegetarian sandwich on the menu, as well as a few meatless side dishes. Additional vegetarian sandwich make irregular appearances as specials.
The vegetarian sandwich, served on ciabatta, changes along with the seasonal produce. A recent visit saw the sandwich piled with beets, onions, mushrooms and goat cheese.
The pesto pasta salad was a nice side. Fresh basil and garlic take turns in the driver's seat, anchored by al dente bow tie pasta.
Counter staff capably answered all questions about dietary restrictions. Service is quick, and it can be even faster with call-ahead ordering.
In addition to fabulous bread, The Carvery also produces other delicious baked goods, many for dessert. Methods of satisfying your sweet tooth include giant chocolate chip cookies, butterscotch-chocolate brownies, chocolate chip cookie pie and shortbread cookies. 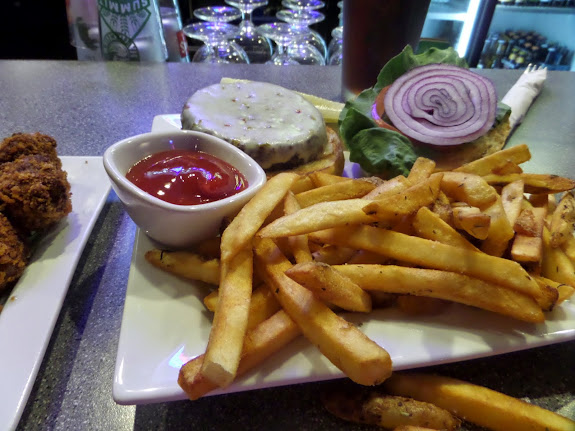 Tatohead's Public House in Merion Village is the brick-and-mortar incarnation of the Tatohead's food truck. The menu is expanded but it still centers around potatoes and things mostly built on spuds.
The restaurant is located in the space that formerly housed Hal & Al's, a popular South Side vegan dive bar. A great deal of discussion was generated about how much of the new Tatohead's kitchen would continue to produce vegan items. While the menu is no longer exclusively vegan, there are vegan and vegetarian choices on the menu, and the staff accommodates most dietary restrictions.
The bar still focuses on craft beer. There are a few less beer taps than before, and a limited selection of bottles. Buckeye State breweries are well represented.
Some items have transitioned from Hal & Al's to the Tatohead's Public House menu. The vegan sauerkraut balls were on both menus, and the fried guacamole calls back to the fried avocados from the Hal's menu.
The standout appetizer, however, were the fried cheese curds. Made with lightly breaded Laurel Valley Creamery cheese curds served with horseradish ranch, these can be eaten like popcorn - very fatty popcorn. Eat a few order and get your daily allowance of cholesterol in one sitting.
The food truck choices of fries or tots in your choice of seasoning and sauce is available in a modified form in the restaurant. In addition, Sophie's pierogi can be piled with a variety of toppings. Vegetarian options include Mediterranean, with hummus, tzatziki, Sriracha, cilantro and tomato, and chili cheese, which can be made vegan with Daiya cheese.
There is also a veggie and vegan burger, served with fries. It can be customized with brioche or pretzel buns and choice of cheese, including vegan cheese.
The menu seems to undergo small changes at an irregular basis. It is still a work in progress.
The interior transition has been slow and steady. Fast food booths were tight and uncomfortable, with the bar high-tops and seats being far more agreeable. There are still a few couches. The latest decor updates included rock music themes with a potato references.
Prices are reasonable. There is real money saving potential that could be amplified by  happy hour drinks.