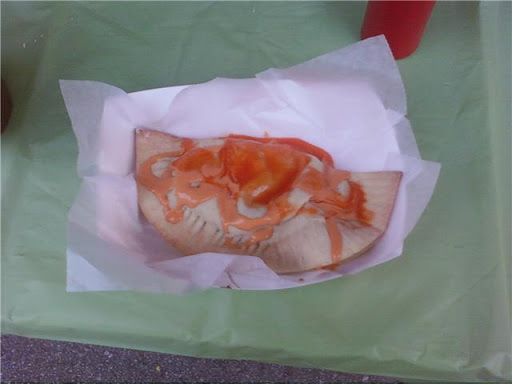 It's that time of year again. Time for toplessness and beer in the park. Time for bands mixed with the scent of body odor and incense. That's right...it's ComFest time.
In between brews, it is often important to obtain sustenance. You could always pick up a vegetarian cookbook from the Krishna tent. However, if you'd prefer somebody else to cook for you while avoiding buying a new wardrobe and changing your hairstyle, there are plenty of options for the vegetarian diner that don't involve changing religions.
Dragonfly's On the Fly (review here) is on-site, featuring your favorite vegetarian comfort food options. The empanada was made with a chickpea mash, black beans and curried onions. It was delicious.
Rad Dog (review here) is also set up at Goodale Park. Vegan dawgs should be leaping off the grill as proprietor Tawd Bell tries to keep pace.
Flavors of India (review here), as with most Indian restaurants, features many vegetarian items. There are veggie platters, veggie wraps and samosas available to cure your addiction to curry.
Whole World Cafe (review here), Columbus' grande dame of vegetarian dining, features one of its most famous items: the broccoli burger. A concoction consisting of brown rice, onion, broccoli, bread crumbs and peanut butter, the sandwich proves that the whole is often times greater than the sum of its parts.
Benevolence Cafe (review here) also made the short trek down the street to feed the vegetarian masses at ComFest. I've yet to have something I didn't like from Benevolence, so this should be a safe option. (Firdous also brought the Mediterranean fare over from the North Market--review here).
Wellness Forum Foods (review here) is a cool operation in North Columbus that prepares ready-to-eat foods for those looking to make healthier lifestyle choices. Chef Del Sroufe is on hand this weekend to whip up the tasty fare.
Living on the Veg is a place I was not familiar with before ComFest. They have a delicious looking menu with an eggplant parm burger and rosemary potato salad on the entirely vegetarian menu board.
Finizio's Family Foods is an Italian catering service. Many of the menu items are vegetarian-friendly.
There are a number of other options scattered throughout the park. The turkey leg place has veggie fried rice. There are many carnival food locations that offer fries, funnel cakes, fried cheese and lemonade. If none of these options work for you, Jeni's root beer floats with Ugandan vanilla bean ice cream should safely put a smile on your face (that is if the rest of the ComFest activities have not done so already).

One of the most talked about films for foodies will be released in Columbus this month. On July 17th at the Drexel, Food Inc. addresses the benefits of local produce while jumping headfirst into the secretive world of factory food.
Food Inc. contains interviews with some of the great minds in food and other characters with insightful perspective on the issues at hand, including Gary Hirshberg, Joel Salatin, Michael Pollan and Eric Schlosser. The movie covers topics from the unhealthy nature of macroproduced food, the pollution and warming produced by these enterprises, how factory food actually creates an unsafe methodology for preventing disease and ways to free yourself from the shackles of factory food.
If you believe that ignorance is bliss, stay away from this movie. If, on the other hand, you sometimes have more questions than answers when reading the food labels at your corner store, this might be the flick for you.
The Columbus Vegetarian Meetup Group is organizing a get together at the showing. You can join the group and attend with likeminded individuals, or you can fly solo and take in the information all by your lonesome. Either way, it's an event that should not be missed.
Posted by deraj1013 at 7:44:00 PM No comments: 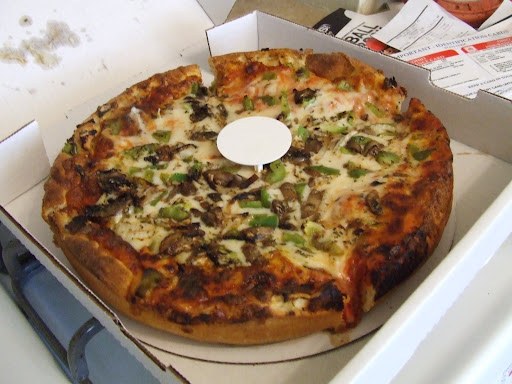 I consider myself an expert on all things Chicago. I can pick the city's preeminent chefs out of a lineup. I know where the places are that don't show up on the radar of tourists or the full-time locals. I even once had a roommate who regularly ordered Italian beef stuffed pizza from Lou Malnati's (you don't even want to know; the guy also never did his laundry and watched professional wrestling with his friend, the one with a four foot long mullet. It wasn't pretty).
So the first time I noticed Fabian's Chicago Style Pizza Place, I knew eventually that I would have to throw my two cents worth in.
Fabian's is located in the Short North. There is seating for about 50 people and a bar with a select number of microbrew taps and the requisite happy hour specials, including $5 off a small and $7 off a large Chicago-style pizza from 3 pm - 8 pm.
There are a limited number of vegetarian options on the menu. There is thin and thick crust pizza, stromboli, a veggie sub and a pasta dish. However, the pizza seems to be the featured attraction.
The Chicago-style pizza is well made. It is thick, piled with fresh toppings and gobs of mozzarella in a mild red sauce. The crust is of a medium thickness, and the pizza is very filling.
While the pizza is tasty, there is one minor detail: it isn't particularly authentic Chicago pizza. I didn't get a chance to sample the thin crust pizza, but while the deep dish was made in a pan, the proportions and flavors did not take me back to Clark Street. It didn't make me pine wistfully for the old Tuesday night jazz shows at the Empty Bottle.
I liked the pizza, but I didn't like it because of its City of Big Shoulders roots. It came off as a solid attempt at Chicago style, but it was missing something a little je ne sais quoi. It's a quality pie that is marginally closer to Chicago style than Taco Bell is to Mexican style.
This limits local vegetarians looking for Windy City heat to two options. Either head to Wholly Joe's up by Polaris, or drive six hours to Chicago so you can get a mozzarella, provolone, asiago, smoked gouda and pesto pizza from Pinocchio's or the cornmeal dusted thin crust at Barnaby's or the 5,000 calorie-per-slice goodness of Giordano's stuffed crust pizza or a whole wheat crust pesto pizza from Edwardo's. Option three is to enjoy Fabian's as quality pizza in the Short North (which is about as close practically and geographically as it gets to true Chicago style). 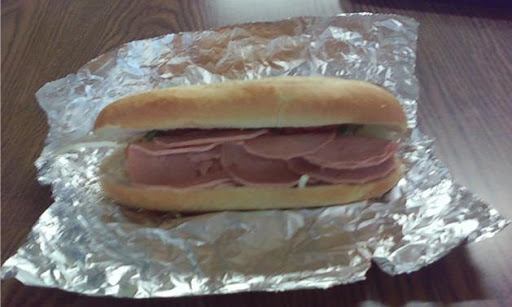 Vegetarian meat substitutes can sometimes be a scary proposition. There are familiar items like veggie burgers and veggie dogs. There are also replacement options like veggie chicken patties. The most frightening products include insidious-sounding laboratory creations like vegan haggis.
The vegetarian sandwich at Lac Viet is in a category that would have sickened me before I got the opportunity to sample it: vegetarian ham. First, I had to make sure that the menu wasn't referring to cured meat made from a pig that didn't eat meat. It wasn't; in fact, it is a vegetarian ham substitute.
The faux ham is piled on a crusty sub roll with lettuce, tomato and onions in a mildly spicy mayo. I upgraded the spiciness by adding a river of Sriracha. The bread is fantastic, and the sandwich is an absolute steal at $4.
Despite my aversion to fake meat products, the Lac Viet sandwich is something I'd try again. You never know if you're going to like something unless you try it, after all. 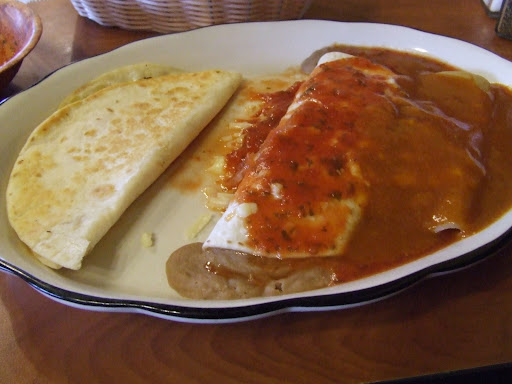 Mexican food is the go-to international comfort food for many Americans. Vegetarians (many of whom are American) follow this same path.
However, Mexican cuisine has a couple of things that vegetarians need to be wary of when ordering from the menu in order to keep their vegetarian comfort zone intact.
The number one hidden animal product in Mexican food is lard, which is used in the preparation of traditional refried beans. A healthier dining public has caused some (but not all) kitchens to eschew using this ingredient.

As in most cases, the best course of action is to ask your server if the beans are made with lard (or take me if you need a Spanish-to-English translator...but you're picking up my margarita tab).

A number of places in the Canton area did me one better and actually list specific vegetarian items on the menu. It should save you the trouble of driving around town trying to figure out who uses pork fat in their beans, at any rate.
Chips and Salsa is a new place near Belden Village/Westfield Mall owned by Oscar McBenttes. The space has been transformed since its last incarnation as Ponderosa. The colors are bright and the atmosphere is festive.
The menu features six vegetarian combination plates, a quesadilla, guacamole and spinach and cheese enchiladas. The cheese enchilada was especially tasty. The salsa was also better than average.
Another option for vegetarian Mexican in the area is El Campesino. There are multiple locations that are more similar than different. The menu at El Campesino also offers six vegetarian combos.
Tlaquepaque is another restaurant with vegetarian options near the mall. Most of the vegetarian options are available a la carte rather than as combos. 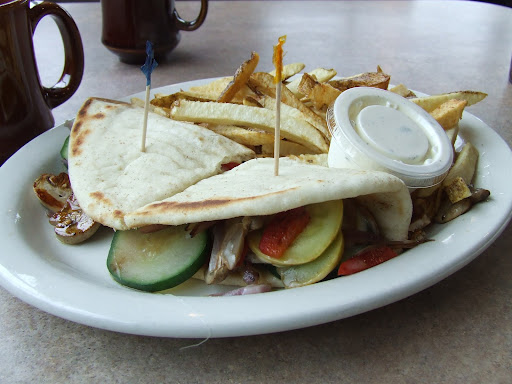 Getting my attention is a fairly simple proposition. Like a bull in the ring charging for the red cape, I can easily have my attention captured by a few choice occurrences.
Explosions--check. Megan Fox--check. The word vegetarian on your restaurant sign. Boom. You had me at the word vegetarian.
Samantha's Sunny Corner Restaurant and its vegetarian sign are located in Canton. Samantha's is a diner that serves breakfast all day. They also offer a number of vegetarian options on the menu.
Prices are very reasonable. Nothing on the menu is more expensive than $12. Service is brisk and informal.
There are only a couple of vegetarian items listed on the menu. However, according to the chalk board menu inside, Samantha's will try and make anything you want if you muster up the courage to request it. I imagine an eggplant and heirloom tomato Napoleon with herbed goat cheese sauce drizzled with pesto coulis (a dish fabricated in my head) might not be an option, but the policy does indicate that Samantha's is accommodating to the vegetarian diner and their possible dietary requirements.
The veggie wrap is extremely tasty. Zucchini, squash, red peppers, onions and mushrooms are griddled with local Swiss cheese in a thick, spongy pita wrap. It is served with a house made ranch dressing and a choice of sides which include chips, fries and potato salad. The dressing makes the vegetables in the sandwich sing. For $8, it's a great lunch portion.
The closest local comparison I can make for Samantha's is to juxtapose it with Gregory's Family Restaurant. I prefer the food at Gregory's to that of Samantha's, but since Samantha's keeps slightly longer hours, maybe you could grab lunch at Gregory's and dinner at Samantha's and everybody could go home a winner.