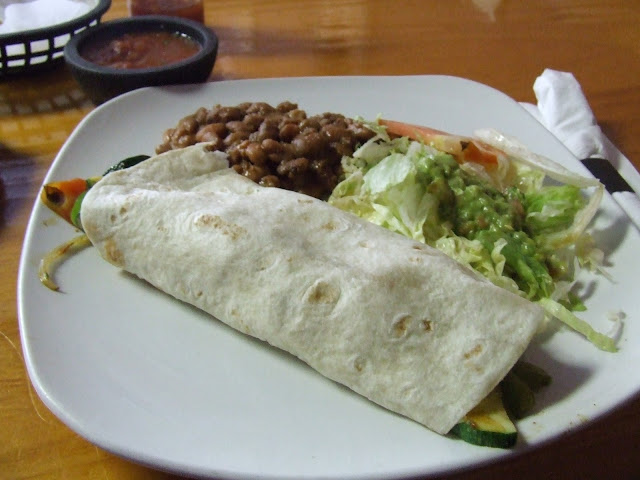 Cazuela's Grill is a cookie cutter Mexican restaurant north of Lane on High Street. Although the menu features a slightly higher percentage of grilled fare, the menu in most ways is nearly indistinguishable from a myriad of other dull Mexican restaurants (see El Vaquero or Las Margaritas) in Columbus.

The main attraction of Cazuela's seems to be the happy hour specials from 2 to 6 pm. There are mixed drink and beer specials as well as half price appetizers during happy hour. There is a fairly limited roster of vegetarian appetizers that includes bean nachos, guacamole and other chip dips.

The regular salsa that's part of the obligatory gratis starter is fairly bland and characterless. It is improved greatly in the rancho dip, which is a combination of cream cheese, cheddar and salsa.

There are seven vegetarian entrees. The veggie burrito is reasonably sized. It uses a flour tortilla to encase grilled onions, tomatoes, mushrooms, peppers and squash. The combination of grilled vegetables is pleasant if unspectacular.

Cazuela's has voluminous outdoor seating. The season to take advantage of patio seating is coming to a close, but today, most people were eating outdoors. Those who prefer to eat inside can enjoy Cazuela's tastefully appointed interior. Carry-out orders can also be made. Prices are reasonably inexpensive.

Overall, Cazuela's was fairly average. The quality of the food was similar to that of most pedestrian Mexican eateries. They do have a decent number of options for vegetarians, and they feature lots of drink specials, so Cazuela's isn't a complete bust. However, places like Cuco's, Chile Verde and Talita's offer food with decidedly more character than Cazuela's.