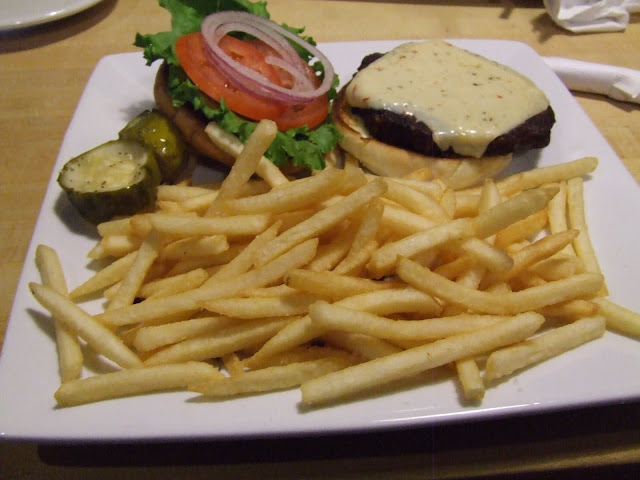 For years, I have avoided Barley's Smokehouse, instead frequenting the Brewing Company location based upon the scenario created in my head in which a barbecue joint would be biased against vegetarians. In certain instances, though, it's safest to expect the unexpected (or at least expect that my prejudiced decision making would again be proven flawed).
Barley's flagship operation in the Short North has always been successful because the menu features comfort food classics accompanied by craft brews with a ton of character. The Smokehouse keeps the same formula, but offers more pit-cooked carnivore fare. Despite the ribs and brisket focus, Barley's Smokehouse does have a vegetarian burger, a veggie wrap, a quesadilla and a couple of side dishes including French fries and onion straws for vegetarian diners.
The veggie burger at both Barley's locations is excellent. It's a house-made black bean, mushroom, and rice patty with a smoky, savory character that lingers. The patty crumbles easily, and it's somewhat delicate structure is the biggest fault in an otherwise excellent veggie burger. Toppings include cheddar, pepper jack and blue cheeses, and mushrooms.
The side of pickles is very good. Two big, crispy pickle chips come with the sandwiches. The fries are bland and somewhat one-dimensional.
The mixed veggie quesadilla is also nice. Grilled zucchini, squash, peppers and onions are stuffed into a flour tortilla and served with a mild salsa and sour cream. The portion is large enough to make the dish a virtual entree even though it is billed as an appetizer.
The Smokehouse restaurant has a sports bar setup. When combined with the brewed brewpub offerings, it's an accommodating spot for meatless diners.

Rachel (Hounds in the Kitchen) said...

I LOVE those pickles!!