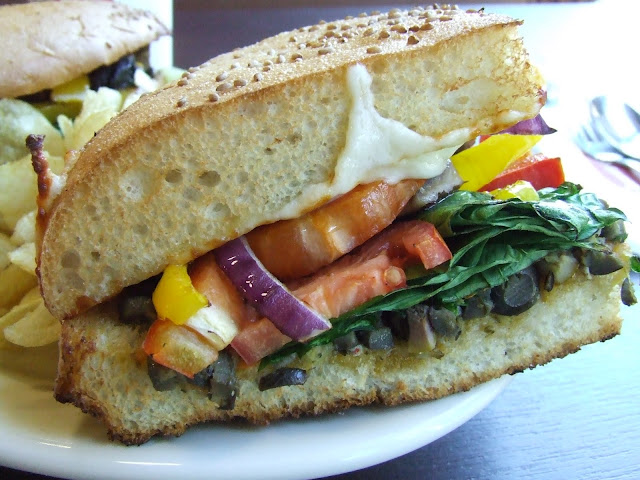 Jason's is a fast-casual deli chain that started in Texas. There are currently two locations in Central Ohio in Dublin and Grandview. I visited the Grandview Yard store.
Jason's Deli specializes in New Orleans favorites like the po' boy and the muffaletta, although it also makes wraps, paninis and other sandwich types. There is a huge salad bar, and the kitchen prepares a wide variety of soups, salads and pasta dishes. The menu has extensive vegetarian options, and Jason's Deli offers a complete gluten-free menu as well.
The Grandview location is large, with extensive indoor and outdoor seating. Like Noodles & Company and Pei Wei, orders are placed at the counter and served at a table with a number clipped to it.
As an avid devotee of Gulf Coast cuisine, my order was decided before I walked in the door: the veggie muffaletta
The veggaletta is made on thick, crusty sesame seed-encrusted bread. Thick slices of portobello mushrooms, tomatoes, spinach, red and yellow peppers and red onions are piled on the melted provolone and olive salad-laden bread. The mushrooms were cooked with a hint of red wine, and had great flavor. The sandwich was on the dry side, and the olive salad could have been served in a larger proportion to offset the moisture lost to the toasted bread. Another solid option might be to add guacamole to the sandwich, although that would get you shot in New Orleans.
The sandwich had good ingredients and a great appearance. It's composition needs to be tinkered with in order to be more successful.
The vegetarian French onion soup was rich and savory. Beef broth is replaced with a mushroom broth, and the soup crock is crowned with melted Swiss cheese. The soup is delightful, and it's a great example of how judicious substitution of ingredients when making vegetarian versions of non-vegetarian dishes can create fantastic results.
Other vegetarian items on the menu include three soups, the spinach veggie wrap, a portobello wrap, a build-your-own sandwich, a mushroom pasta dish and assorted sides like chips and salsa, steamed veggies and a hummus platter. A large percentage of salad bar items are labeled organic.
Prices at Jason's seem slightly high, although there is plenty of vegetarian variety on the menu. Overall, it's a safe bet for vegetarians and health-conscious diners, but it doesn't jump off the page.

I just moved to Columbus and am a big fan of Jason's Deli. The Grandview store is much closer to where I live, but using Google maps and the address they give on jasonsdeli.com, I can't locate the restaurant! Google maps places me in the middle of a neighborhood. Can you give a girl any tips on how to locate this particular Jason's Deli? Thanks!

They have a map right here: Jason's Deli -- Grandview

If you find the Grandview Yard development, it's right by the parking lot. The signs are visible there and from Goodale.